Jesse Lee Shively, 37 of rural Lancaster, Missouri passed away on Sunday, January 2, 2022 at the Hannibal Regional Hospital in Hannibal, Missouri.  He lived most of his life in Schuyler County, Missouri.  He passed with his loving wife, children and mother by his side.

The son of Ricky Dale Shively and Maria Elena (Angel) Tuttle, he was born on February 25, 1984 in Columbia, Missouri.  He was a 2002 graduate of the Schuyler R-I School.

On September 10, 2019, he was united in marriage to Denise Renee Roberts in Kirksville, Missouri.

Jesse is preceded in death by his grandfather, Clarence Dale Shively on September 9, 2009 and a step grandmother, Zenona Angel.

Jesse was employed with Chevron Performance Pipe of Bloomfield, Iowa

as a lead technician.  He had been employed with this company for over six years.

He loved spending time with his wife and children.  Jesse loved and adored his grandchildren but, his favorite part was spoiling them rotten, sharing his passions with them and teaching them how to be onery.  He loved watching his children play sports when they were younger and any other events they had going on.  He enjoyed being outside, hunting, riding his motorcycle, going to the movies and always staying busy.  Jesse’s hobby was gun collecting.  He enjoyed spending time at TNT gun shop, hanging out with family and having a beer or cooking brisket with his good neighbor, Steve. 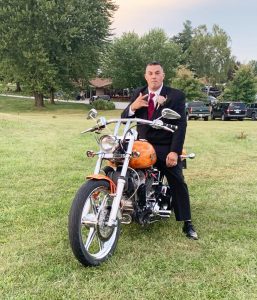