Queen City, Missouri, was the place to watch the annual Schuyler St. Patrick’s Day parade on Saturday, March 13, 2021. Green was everywhere, hats, hair, hoodies, balloons, banners, and even some showed up in the grass. One of the best parts of the parade – and it was all good fun – was the banner, honoring Mike Calhoun (1954 to 2019), known affectionately in the area as “Haystack.” Excitement would rise, as Mike was spotted, rounding the corner on the Queen City square, proudly leading the parade on his familiar bicycle. He is missed, but the banner brought back many good memories for everyone. A big thank you from Schuyler residents to the participants and organizers – young and old alike – for the good time parade. 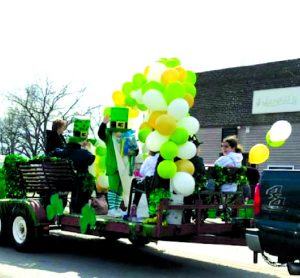