Max Evans Ayer, 83, of Bonham, Texas, died peacefully at his home, following an extended illness on Wednesday, February 24, 2021. He was born on August 1, 1937, in Lancaster, Missouri, the son of Glen O. Ayer and Lillie May (Patsy) Ayer.

Max attended Lancaster High School, graduating in 1955. He then attended the University of Missouri, earning his BA in Chemistry, minoring in Biology, in 1959. Following his undergraduate studies, he attended the Kirksville College of Osteopathy and Surgery, graduating in 1965. Upon completion of his internship at Dallas Osteopathic Hospital in 1965, he began his medical career at Fite-Vinson Clinic in Bonham, Texas, specializing in Family Medicine and Surgery. He also spent two years at M&S Clinic, before opening Ayer Osteopathic Clinic in 1974, where he practiced until 1984.

After leaving Bonham, he served as a doctor for Carnival Cruise Line and as Locum Tenens and ER Doctor for hospitals across the state of Texas. In 1990, he opened Ayer Medical Center in Athens, Texas, where he practiced until 2013. He then relocated back to Bonham, where he retired in 2016.

Max loved to travel. He was a multi-engine, IFR rated private pilot and flew to many destinations in the United States, including Alaska, as well as the Bahamas. He also enjoyed traveling by train.

He took numerous Amtrak trips across the country and did the same on his Harley Davidson motorcycle. Max loved to read books on American history and had a special passion for the Native American culture. During his travels, he visited several Indian reservations and began collecting Indian memorabilia.

Max was an animal lover and owned many animals during his lifetime, including cats, dogs, cattle, a pet skunk, and even wallabies. His dearest were his chihuahuas and his last dog, Mattie. Max was a Christ follower. He was a lifetime member of the First Christian Church. One of his most cherished trips was to the Holy Land.

Max was preceded in death by his parents, Glen and Patsy Ayer; a sister in infancy, Marilyn Ayer; niece, Connie Ayer Rodery; and nephew, Stanley Ayer.

The family would like to extend a special thank you to Max’s devoted caregivers and to Guardian Hospice of Sherman. 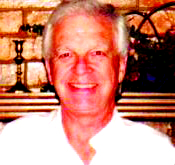