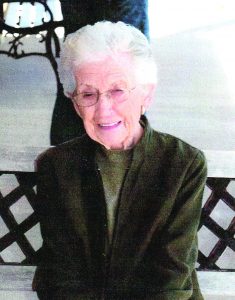 The daughter of Eugene Harold and Cuma Hildred (Gosser) Kerby, she was born on September 20, 1923, in Appanoose County, Iowa. Betty was raised on the family farm south of Glenwood, Missouri, and graduated from the Lancaster High School, where she loved playing varsity basketball. On December 12, 1943, in Kirksville, Missouri, she was united in marriage to Harold Clayton Weaver, and to this union four sons were born, Dennis, Jeb, Rocke, and Larry.

Betty is preceded in death by her parents; her husband, Harold on October 24, 2003; and two brothers, Gordon Kerby and his wife, Wilma, and Gerald “Pedro” Kerby.

Betty was a member of the Bethel Church and also served on the Bethel Cemetery Board for many years. She was also a member of the Glenwood Community Club and was a 4-H Leader for a number of years. Betty was a licensed cosmetologist, where she owned and operated “My Little Beauty Shop” in Ottumwa, Iowa, until moving to the farm west of Glenwood, Missouri. She loved working in her beautiful garden, and was well known for her amazing tea rings and cooking skills. She and Harold loved to go dancing with many friends. She was a loving mother and her grandchildren, and great grandchildren always put a smile on her face.

Graveside services were held on Friday, February 19, 2021, at 1 p.m. at the Arni Memorial Cemetery in Lancaster, Missouri, with Billy Wallace, Pastor of the Queen City Christian Church in Queen City, Missouri, officiating. Pallbearers were Vincent Careswell, Dr. Kerby Weaver, Joshua Weaver, Dr. Kelly Burchett, Logan Weaver, Tanner Weaver, and Tyler Weaver. In lieu of flowers, memorials have been established for Arni Cemetery or Bethel Cemetery. Online condolences may be expressed to the family, by logging on to normanfh.com. Burial was in the Arni Memorial Cemetery in Lancaster, Missouri. Arrangements are under the direction of the Norman Funeral Home of Lancaster, Missouri.