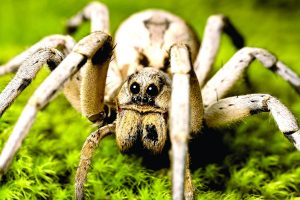 Are you running into spiders or spider webs around your home and garden? Have you noticed the beautiful, intricate work of a spider on a fence post, on a tree or maybe the corner of your barn? Spiders and their webs seem to be everywhere right now. Garden spiders hatch in the spring, reproduce, and die in the fall. They lie low most of the summer, trying not to be eaten, and those that survive are now large enough to start spinning webs.

Female spiders will lay eggs in the fall. Garden spiders, such as the black and yellow Argiope are Orb-Weaving spiders. Orb weavers produce a neat, flat, classic spider web. The web is used to capture prey, as these spiders have poor vision. There are more than 2,500 species of orb weavers in the United States, but one of the most recognizable is the black and yellow Argiope. They are large and marked with black and yellow. The web may be up to 2 feet in diameter and stretched across a path, between shrubs or across tall weeds. Other orb-weavers are various colors, shapes, and sizes. Their webs can span many feet. They are great at catching all kinds of insects.

Wolf spiders are usually big, brown, hairy, and fast. Their size varies from 1/4 inch to 1.5 inches in body length with a leg span of 3 inches. Wolf spiders produce a venom designed to paralyze their prey (normally a small crawling insect), but, in the case of the wolf spider, this venom is not especially toxic to human beings.

Generally speaking, a wolf spider bite is no more dangerous or painful than a bee sting. Typical reactions to a wolf spider bite include initial pain and redness, but both symptoms gradually subside in most people. In fact, medical histories hold no records of serious consequences resulting from a wolf spider bite. On rare occasions, however, people have been known to have an allergic reaction.

Wolf spiders move into homes for the winter. They have very good vision and hunt down prey day and night. They do not make webs because they are hunting spiders. They are very impressive and great hunters. They may big and frightening to some, but there’s really no need to kill this spider. Just take a tissue and pick it up and put it in a protected location outdoors.

There are approximately 40,000 species of spiders in the world. Spiders are excellent insect predators, even more efficient than birds. They remove pesky insects from your yard. Most of the large-abdomen garden spiders you see in webs probably are females. Males are a bit smaller and tend to roam.

The spider web is made from a liquid protein inside the spider’s body that hardens to polymer when exposed to air. For its diameter, web material made by some spiders is stronger than steel. Garden spiders are orb-web builders: They put their abdomen to the night air and emit webbing into the wind, until it attaches to some distant thing. They strengthen the first key strand several times, then use it as a highway between points, building a framework of sticky silk.

Once the framework is in place, they begin spiral construction, keeping in touch with the previous strand by a leg and thus maintaining the nearly perfect, concentric measure, so admired by humans and Halloween merchants. Many orb-weavers build a new web each day. Generally, towards evening, the spider will consume the old web, rest for approximately an hour, then spin a new web in the same general location.

Besides the orb spiders, the grass spiders, otherwise known as the funnel web spiders, spin webs on the lawn and are ground dwellers.