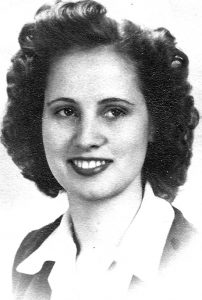 The daughter of Leo Vicq and Mabel Louise (Snowbarger) Dean, she was born November 30, 1924, in the little house on the family farm southwest of Coatesville, Missouri. On May 15, 1944, in Queen City, Missouri, she married Forrest Watson and they had three children, Janet, Forrest, and Sandra. On August 29, 1963 in Lancaster, Missouri, she married Richard Sidwell, and he preceded her in death.

Ruth attend school through the eighth grade in Coatesville and graduated from the Lancaster High School in 1943. She worked at the Rock Island Arsenal, during summer breaks and during the war. She was a homemaker, and then in the early 1960s she went to work at McGraw Edison. She later sold real estate for Century 21 until she retired.

She loved her flowers, being outside, traveling, and was an avid humming bird watcher. She was a member of the White Shrine and Royal Neighbors. She was a life member of the Rebel’s Cove Historical Society.

Visitation was from 10 to 11 a.m. Tuesday, August 25, 2020, with funeral service at 11 a.m. at Davis-Playle-Hudson-Rimer Funeral Home. Burial was in Park View Memorial Gardens.