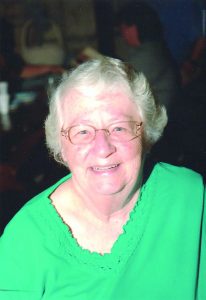 Reta Jean (Lyberger) Allen, 88, of Kirksville, Missouri, formerly of Schuyler County, Missouri passed away Thursday, June 25, 2020, at the Kirksville Manor Care Center in Kirksville, Missouri.
The daughter of Lewis McKinley and Clara Elma (Johnson) Lyberger, she was born on March 28, 1932, in the Jimtown neighborhood, southwest of Glenwood, Missouri. She attended Jimtown school and graduated from Lancaster High School with the class of 1950.
On October 4, 1953, in Kirksville, Missouri, she was united in marriage to Milo Junior Allen, and to this union two daughters were born, Lisa Joan and Lori Beth.
Survivors include her two daughters, Lisa Jones and husband, Mark, of Lancaster, Missouri, and Lori Allen of Kirksville, Missouri; two grandsons, Thaddeus and Ethan Jones, both of Lancaster, Missouri; numerous nieces and nephews, cousins, other family members; and many good friends.
She was preceded in death by her parents; her husband on November 9, 2002; one granddaughter, Britney Jones; three brothers, Wayne Lyberger and wife, Vera, Warren Lyberger and Joe Lyberger and wife, Velva; a twin sister, Reba Camden and husband, John; and a brother-in-law, William L. Allen and wife, Luane.
From 1953 to 1955, she was employed by Sheaffer Pen of Fort Madison, Iowa. Following her employment with Sheaffer Pen, she was a homemaker. Due to Junior’s job with the Missouri Highway Department, they moved several times throughout north central Missouri in the late ‘50s and early ‘60s before moving to Kirksville, Missouri. In 1973, they moved to Queen City, Missouri, and this remained their home until after Junior’s passing. In 2004, she moved to the Lancaster Senior Housing. Declining health required her to move to Highland Crest Assisted Living in 2014 and then to the Arbors at Highland Crest in 2018.
She was a member of the Schuyler County Church of Faith and a past member of Baker Sparks American Legion Auxiliary.
Together Reta and Junior enjoyed attending local country music shows and traveling to several states in the western United States. Reta also enjoyed reading and collecting recipes. Most of all, she enjoyed her family.
The family wishes to thank the staff of Highland Crest Assisted Living, the Arbors at Highland Crest, and Kirksville Manor Care Center for their excellent care of Reta over the last six years of her life.
Funeral services were held on Sunday, June 28, 2020, at 2 p.m. at the Norman Funeral Home in Lancaster, Missouri, with Sonny Smyser, Pastor of the Schuyler County Church of Faith in Lancaster, Missouri, officiating. Music was special CD selections of “Jealous of the Angels” and “In The Garden.” Pallbearers were Ethan Jones, Thaddeus Jones, Mark Jones, Bill Camden, John Moore, and Kale Moore. Visitation was on Saturday, June 27, 2020, between the hours of 6 and 8 p.m. at the Norman Funeral Home in Lancaster, Missouri. Memorials have been established for Arni Memorial Cemetery in Lancaster, Missouri. Online condolences may be expressed to the family, by logging on to normanfh.com. Burial was in the Arni Memorial Cemetery in Lancaster, Missouri. Arrangements are under the direction of the Norman Funeral Home in Lancaster, Missouri.