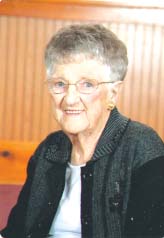 Elizabeth “Betty” Elaine (Moore) Beeler, 96, of Lancaster, Missouri passed away on Thursday, April 16, 2020, at the Schuyler County Nursing Home in Queen City, Missouri.
The daughter of Charles Herbert and Gertrude Opal (Kerby) Moore, she was born in Glenwood, Missouri on September 12, 1923. Following her graduation from the Glenwood High School in Glenwood, Missouri, she was united in marriage to Dale LaRue Beeler on November 29, 1942, in Ottumwa, Iowa and to this union four children were born, twins, Betty Gail and Eddie Dale, George Phillip and Penny Lee.
Survivors include her children, Phil Beeler and wife, Sara, of Lancaster, Missouri, and Penny Brummer and husband, Denny, of Glenwood, Missouri; four grandchildren, Micheal Dale Beeler and wife, Jennifer, of Oskaloosa, Iowa, Kea Elizabeth Paredes and husband, Miguel, of Columbia, Missouri, Eric Vincent Brummer and wife, Breanna, of Oskaloosa, Iowa, and Anthony Dale Brummer of Columbia, Missouri; 10 great grandchildren, Natalee, Xavier, Ameliya, Zayden, and Evalynn Beeler all of Oskaloosa, Iowa, Adelyn and Isabel Paredes of Columbia, Missouri, and Lizzie, Jace, and Rogan Brummer all of Oskaloosa, Iowa ; one sister, Mary Beeler of Lancaster, Missouri; one brother-in-law, Jim Steggall of Lancaster, Missouri; numerous nieces and nephews; other family members; and many good friends.
Betty is preceded in death by her parents, Herbert Moore on June 16, 1945, and Gertrude Opal Kerby on May 2, 1989; her husband, Dale Beeler on October 21, 1983; one son in infancy, Eddie Dale Beeler; one daughter, Betty Gail Crooks on August 30, 2015; two brothers, Kenneth and wife, Betty Moore, and Clyde and wife, Ruth Moore; one brother-in-law, Okley Beeler; and one son-in-law, Robert Crooks.
Betty was a member of the Lancaster Christian Church in Lancaster, Missouri, and attended regularly, as long as her health permitted. She fulfilled numerous capacities in that church for a number of years. Betty worked as a telephone operator, deputy county collector, and a bank teller.
A Celebration of Life service will be held on Saturday, June 20, 2020, at 2 p.m. at the Lancaster Christian Church in Lancaster, Missouri with Billy Wallace, Pastor of the Lancaster Christian Church, officiating. Pallbearers will be her grandchildren. Visitation will be held one hour prior to the Celebration of Life services from 1 until 2 p.m. Memorials have been established for the Lancaster Christian Church in Lancaster, Missouri. Online condolences may be expressed to the family, by logging on to normanfh.com. Burial will be in the Arni Memorial Cemetery in Lancaster, Missouri. Arrangements are under the direction of the Norman Funeral Home in Lancaster, Missouri.