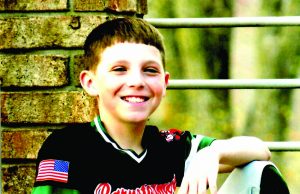 Riverdale Middle School is pleased to announce that Mason Smyser of Cordova, Illinois, has been awarded the 2020 David Marx Good Kid Sixth Grade Award. Mason just completed his sixth grade year and represents the qualities of both an outstanding student and one of good character. He demonstrates a willingness to help others, a positive attitude, and a zest for life. This is a very exclusive honor, considering only one student was chosen out of the class of 95 students. His school and teachers congratulate Mason.
Mason is the son of Chris and Danielle Smyser of Cordova, Illinois. He is the grandson of Sonny and Bev Smyser of Lancaster, Missouri, and the late Cathy Beeler, Max and Natalie Beeler of Columbia, Missouri. He is the great grandson of Sally and the late Clarence Kearse of Lancaster, Howard and Lola Anderson of Lancaster, and the late Payton and Juanita Smyser, and the late Paul and Emogene Beeler.