Lancaster Fire and Rescue (LFR) members attended a two day class for Auto Extrication: Technician Level that was held in Kirksville, Missouri, over the weekend of March 13, 2021. The team spent Saturday indoors, reviewing the tools and learning the many different techniques on rescuing people trapped in their vehicles. Sunday’s class was all “hands-on,” as the fire fighters put Saturday’s lessons into real life situations.

In addition to the Schuyler team, were members of the Kahoka fire department, which included their Fire Chief Christopher Blomgren – who began his volunteer fire fighting career in Lancaster. Rutledge was also represented with a member from their volunteer team.

In order for the Lancaster Fire and Rescue to have experience on their new equipment, Schuyler Fire Chief Jason Watson took Engine 702 to the training school.

The members of the LFR, who earned 16 hours accreditation for the class, were Asst. Chief Spencer Starrett, Apparatus Engineer Kevin Buckallew, and Firefighters Kirk West and Kyle Buckallew. Firefighter/EMT Austin Ridgeway doubled down, getting his accreditation for fire service and 16 non-core medical CEUs.

The class was sponsored by MoDOT and hosted by Kirksville Fire Department.

The Downing firefighters want to say thank you to the community and the Schuyler County board of commissioners for making it possible for the firefighters to update some of their equipment this year.

The team purchased new up to date protection helmets to replace the well used older ones. The Downing community has always been 100 percent behind the fire department with their support of the fundraisers and the men and women, who serve on the team.

The Downing department sends a big thank you to Schuyler 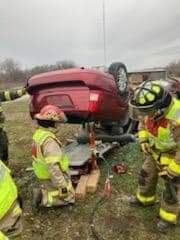