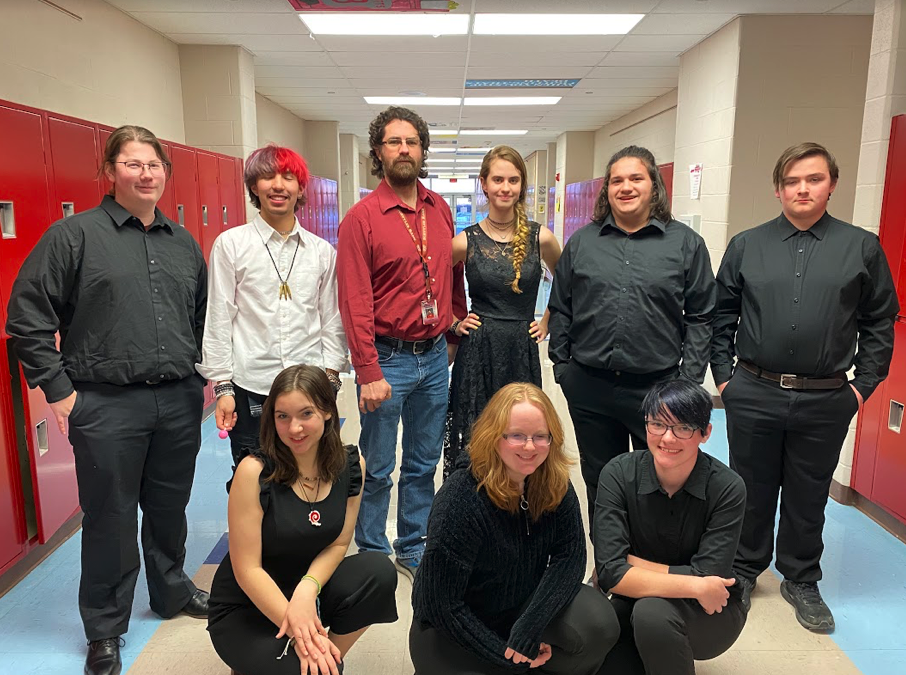 All-conference, all-district, and all-state are titles of honor for many students and a goal many more are chasing. These are all achievements to be proud of for our band as well as the school and community. Let’s celebrate their efforts and gain some insight into what is involved in earning these titles.

Junior high, all-district band is the most limited opportunity for our students. Each year, as a director I get to pick up to 10 qualified students for a list. According to my standards as a director I pick 5-6 students and submit them with a preliminary score, their grade in school and the instrument they play. The organizational leaders then pick from everyone’s list the instrumentation they need to fill two 90+/- person bands. Typically our school gets 2-4 students in the band. The same rules apply to the large schools in the district. Large schools may get 8-10 members in the band but the percentage to their school band is sometimes much smaller for them.

The prestige of JH District band comes from chair placement once the students audition. Our middle school members prepare 3 scales, one short piece of music to show technical and musical ability, and in the audition room perform a short piece of music that they only get 30 seconds to look at before performing (sight reading).

“The scales were decent, as I approached the top note there were some octave changes and squeaks but it was ok. Then there was an etude which me and my friends have been working on for several months. The point is it is rhythmically challenging and hits high and low notes.Once I finished, a horrendous burden was lifted from me.”

This year three students from Schuyler are junior high all-district members: Brendon Aeschliman 7th grade is the only Bassoon player in the band. Asher Applegate 8th grade is the #8 percussionist out of 14, and Taylor Erwin is the #9 Trombonist out of 23.

Remember our district is every school not just 2A geographically from Putnam to Clark, down to just north of St. Louis over to the south and west of Columbia This includes Hanibal, Troy, Mexico, Moberly and the Columbia Schools as well as all of our conference schools.

Monday, February 7th, half of our high school band went to the all-conference band at Harrisburg. Conference band is an ensemble where the honors are in the chair placement. Musicians do not have to audition into conference ensembles. I, as the director, choose who is selected from our school. I base that on three qualifications. First, reading ability; the students have to learn the entire concert in one day of rehearsals. Being able to sight read is important to the speed the student can learn new music. Second, technical ability; there are 3 scales and 2 musical excerpts that the students prepare to prove their ability to play at the correct level for the concert. Finally, dependability; students that are chosen need to be able to fulfill all of the time requirements and be disciplined enough to show up early, be prepared, be able to rehearse all day, and still be able to perform in the evening.

This year Schuyler has the #1 and #2 alto saxophone in the conference, Nathan Leslie and Rodrigo Razo. Rachel Wallace was seated 6th chair on alto saxophone. Senior and vanguard member of the Bighorn Brigade, Emily Durham was 4th chair Trumpet. Hannah Leftwich was 4th chair Trombone. Evianna Aeschliman was the #2 Euphonium player. Carson Allen and Easton Kimber are the #2 and #3 percussionists in the Conference.

Hannah Leftwich, sophomore trombone, had this to say about her first audition experience:

“[I learned] that I need to be more prepared for next year and try out for districts as well as conference band. I also learned that I need to be more confident when I play” She also noted that  “although it is an exhausting and long day, it is well worth the experience to play in front of a new director with different things they have to play and teach.”

High school all-district band is a big step up from the conference auditions. Again, our Northeast district is all schools from the smallest to the largest. Students prepare up to 10 short technical and lyrical exercises cut from the state audition list as well as 25 scales for their audition. They play a blind audition where they are a number to the judges that sit with their backs turned. In an audition the student has one shot to prove what they are capable of. I do not pick and there is no guarantee that schuyler students can be part of this ensemble. Acceptance is all based on individual merit, and any student that puts in the effort can try out.

I worked for about 4 weeks on all 3 etudes. I started working on the timpani piece first because it was the easiest and it was more applicable to the snare piece that I later moved on to followed by the mallet piece. The mallet piece is what I struggle the most on, but even though I didn’t get a chair I still had fun and learned a lot and I’m glad I did it.

Schuyler had 7 students put in that effort. Of those 7, Carson Allen was selected as the #3 percussionist, Nathan Leslie was #3 alto saxophone, and Evianna Aeschliman was named honorable mention on Euphonium. From the Lewis and Clark Conference only 6 students made all-district; 3 from Fayette, 2 from Schuyler, and 1 from Westran. Of the other local schools Kirksville had 4 all-district members and Clark county had 1.

“I’m very proud of how our band students and Mr. Aeschilman represent the community and Schuyler R-1 schools. They put in the time and effort so it’s great seeing them have success!” -Principal Matt Klingner

Those students that make the All-district ensemble have the opportunity to audition for All-state. The audition material is the same as for the district audition but in its entirety, not shortened beforehand. Nathan Leslie, a senior, and Carson Allen, a junior, had this opportunity. Neither one made the band.

“I just wanted to be happy with my auditions by the end of the day and have a good time, and I think I really did! The day dragged on for a while just waiting for these auditions in huge lines. All in all, I am satisfied with this year’s auditions and I think I did well, but I am not satisfied with my high school career ending here, and I plan to try even harder next year in my auditions!” Said Carson Allen, a junior percussionist who gets one more chance next year as a senior.

My congratulations to Wesley Miner, tuba, from Fayette on his state honorable mention. He is the only conference member to achieve this level.

Through this article I have used several names but only two have been seniors so the potential for the future is great. More incoming sophomores will be auditioning for upper level honor ensembles than graduating seniors. This is not about talent but instead is goal setting, effort, and personal accomplishment from some of the hardest working kids in the school. Thank you all for your continued support.