The Schuyler County American Legion, Post 784, donated a check for $250 to the Veterans Hope for Heroes program sponsored by the Central Missouri Food Bank in Columbia. Accepting the check on their behalf was Teresa Ross. Presenting the check, were some of the many members of the Legion Post.

About the Schuyler County American Legion

The members of the Post are quite active in the community with sponsoring such events and programs as government day for the Schuyler High School students, collect the American flag for proper retirement, support the Veterans Home in Mexico, Missouri, perform graveside military rites, decorate the veterans graves in the county for Memorial Day, award a scholarship to a Schuyler graduate, and many other charitable projects. On Saturday, July 3, from 7 to 11 a.m. the Post is sponsoring a free will donation pancake breakfast at the Queen City Community building in the park. Please, come out and support our Veterans, so they can continue to support our community with their many projects. The members want to remind you that when you come to the pancake breakfast, to also bring any of your American flags that are past their prime, so that the Post can properly dispose of them.

About Hope for Heroes 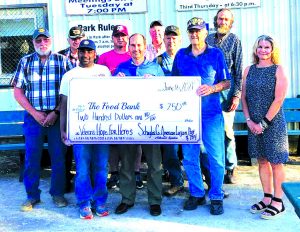