Family, friends, and co-workers were on hand at the Lancaster post office to celebrate alongside Jack Erwin, as he was awarded his 40 year pin for outstanding service to the United States Post Office. Jack received both a certificate and 40 year pin on Friday, April 30, 2021.

When asked when he started, Jack laughing stated, “Oh, about 40 years ago!” After confirming with their cell phones, most everyone agreed, he started in 1981. He began work as a full time sub, doing routes when the other drivers were absent. When Route 2 became available, Jack began driving the route and has been delivering for the residents along the route ever since. The route runs east to Downing, out to the Iowa line, and finally back to the post office in Lancaster. He tallies about 100 miles round trip per day.

“I really like my work and the times when I have a chance to visit with the people on my route,” Jack said. He added, “I have a lot of friends, who work here. It’s just a great place to be.”

In the spirit of fun, Darrell Harvey, retired post master of Downing, presented Jack with a brown paper gift bag of mementos from his 40 years of service. Jack and everyone there had some good laughs, as he was honored with his own private parking sign at the courthouse, a small Christmas tree as thanks for the live ones Jack gave to the Downing post office, lottery tickets for his 401K plan, and the best one last – “Slim Whitman Sings Million Record Hits,” a 33 1/3 record album.

A celebration cake for Jack was designed by Linda Blessing of Downing, who used the postal motto, “Neither rain nor snow…,” as her inspiration for the cake.

Jack and his wife, Linda, live in Greentop, Missouri, where Jack graduated school. When not working, Jack and Linda enjoy, spending time with their large family. 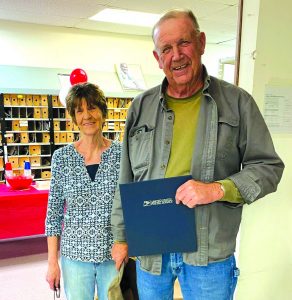