Mason Moncrief topped off his Rams sports career, by signing a letter of intent with North Central Missouri College in Trenton, Missouri, to play golf with the Pirates. The signing took place on April 7, 2021, in the library of the Schuyler R-1 High School in Queen City, Missouri.

At six feet, one inch, Mason brought a lot of talent to the Rams varsity basketball team. However, after his parents, Jill and Brad Moncrief, gifted Mason with his first set of clubs, his enthusiasm for the game took off. According to his parents, “through his hard work, dedication, and long hours on the green, plus the knowledge, guidance, and friendship of his coach, Chris Oliver, Mason will be playing college golf.”

After the signing, a congratulation cake and drinks were served to his family, friends, and team mates, who were sharing Mason’s next step in his college and athletic career. 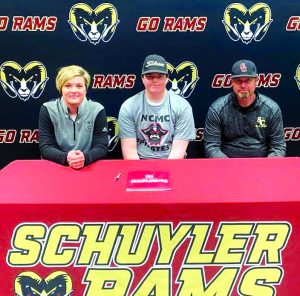 Jill and Brad Moncrief with their son, Mason, after signing a letter of intent to play golf for North Central Missouri College.