Lindsay Gravett was sworn in on Wednesday, March 17, 2021, as the new General Council for the 1st Judicial Circuit Juvenile office. Performing the swearing in ceremony at the Schuyler County Courthouse was Rick Roberts, the Circuit Court Judge for the First Judicial Circuit.

Gravett is taking over the office that was recently held by Patrick Nolan. The position requires her to represent the Juvenile Office of the First Judicial Circuit in cases, involving abuse and neglect and delinquency matters (crimes committed by juveniles). She will perform her duties, as the new general council, out of her private law office in Lancaster, Missouri.

Gravett will work with the Chief Judicial Officer, Jim Kiger, whose office is located in Memphis, Missouri. 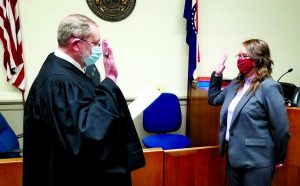