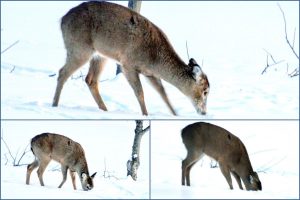 the area wildlife have been challenged by the snow and ice conditions that have kept Schuyler County in the icy grips of winter for the past two weeks. Local deer have been forced to dig deep down through the snow in search of food. (Photo courtesy of Ron Morgan).

Dangerously cold temperatures and wind chills have been hammering Schuyler County for the past two weeks. Local thermometers have flirted with lows in the -7 to -11, while wind chills were dipping down to as low as -30 degrees. The record low of -10 for Monday night, February 15, 2021, broke the historic low of -6 set for that day in 1936.

If the weather forecasters are accurate, Schuyler will see warmer daytime temperatures, going into the weekend, of 23 and 21 for Friday and Saturday, and night time lows, during that time period, of 9 and 20.

The historic single digit temperatures and below zero wind chills made it most difficult for MoDOT to clear the roadways, as the chemicals used to treat covered roads lose their effectiveness below 25 degrees.

In an average winter, MoDOT employees plow about 6 million miles of snow and ice, equivalent to going to the moon and back 13 times. Over the last five years, the annual cost of winter operations ranged from $25-$75 million.

If you’re going to be out, make sure you have a full tank of gas, extra blankets and ,gloves and provisions like water and snacks in the event of an emergency. Keep your cellphone fully charged, but never use it while driving. If you should slide off the road or be involved in a crash, stay inside your vehicle with your seat belt buckled, until help arrives