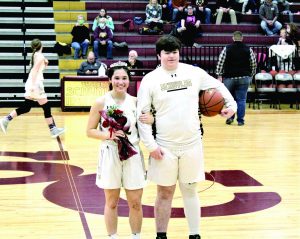 One of the highlights and long standing traditions of the Schuyler R-1 basketball season is Courtwarming. This year, the event was held on Friday, January 29, during the Rams vs. Knox Eagles game at the high school gym.

Seniors Emma Clifford and Mason Moncrief were selected by their classmates to be the 2021 Queen and King for Courtwarming. Emma is the daughter of Kylie Farrell. Mason is the son of Brad and Jill Moncrief.

Marissa Buckallew, the 2020 Courtwarming Queen and her escort Noah Newland, who was representing Corbin Bulechek, 2020 King, presented the flowers and game ball to Emma and Mason, during the crowning of the 2021 Queen and King.

The Courtwarming event also included the presentation of the senior candidates and the freshman, sophomore, and junior attendants, who were voted upon by each class.