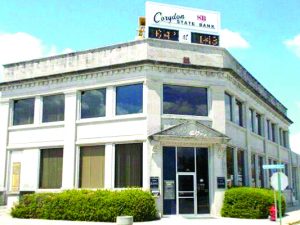 Former Corydon State Bank President, James Paul Sappington, was sentenced in the United States District Court for Southern District of Iowa on December 7, 2020 ,following 28 counts filed against him on September 18, 2019. Sappington plead guilty on count three and was sentenced to eight months in prison and upon release, two years of supervision along with an imposed fine of $10,000 with a special assessment charge of $100.

On June 25, 2019, Sappington was prohibited from any future work in a federally insured financial institution and assessed a $15,000 CMP. That order cited unsafe or unsound banking practices and breaches of fiduciary duty. Specifically, the FDIC found that Sappington, as director, president, chief executive officer, and senior lender of the bank, made unauthorized withdrawals from a customer’s account and from an internal bank account for his personal use; and that he falsified banks records to hide these withdrawals.

An arrest warrant was issued for Sappington on July 12, 2019. The grand jury charges misappropriation by a bank officer, beginning at least as early as June 2017 to, on, or about June 2018, in the Southern District of Iowa and elsewhere, Defendant Sappington, while employed as the President of Corydon State Bank, which was insured by the Federal Deposit Insurance Corporation, embezzled, abstracted, purloined, and willfully misapplied any moneys, funds, credits, securities, and other things of value, belonging to Corydon State Bank and pledged to Corydon State Bank’s care, with the intent to defraud Corydon State Bank, in excess of $1,000.

Sappington pleaded guilty to count three with counts one, two, and four through twenty-eight being dismissed. Sappington was not taken into custody, following the hearing, and will be ordered to voluntarily surrender, following the Bureau of Prisons designated place of imprisonment