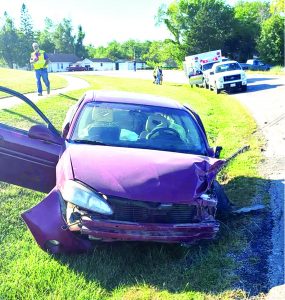 The report of MSHP Tpr. Haley stated that the Keeper M. Grooms, 17, of Bloomfield, Iowa, while in the northbound lane, crossed the centerline and struck the oncoming Grand Prix driven by Queen City, Missouri, resident Dillon L. Watson, 27.

Watson was taken by Schuyler County Ambulance to Northeast Regional Medial Center in Kirksville, Missouri, with minor injuries. The report stated that Watson was wearing his seatbelt, but Grooms was not.

The 2008 Chevy Malibu driven by Grooms was totaled and left at the scene. Watson’s red 2004 Grand Prix had moderate damage and was later towed.