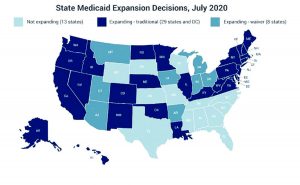 Missouri is facing an important decision: whether or not to accept federal dollars to provide health insurance to many uninsured state residents through Medicaid. Missouri voters will decide whether the state will expand Medicaid, as envisioned in the Affordable Care Act (ACA), during the August 4, 2020, primary election. Hospitals have advocated for expansion since the ACA was adopted, and Missouri remains among the few states that has not embraced the expansion. Missouri has always had the lowest eligibility threshold for Medicaid. Low-income individuals without children are not eligible at all.
The vote will occur during a challenging time for Missouri’s already stressed rural health care system. COVID-19 has taken a toll on the communities that hospitals serve, while hospitals have experienced significantly reduced utilization and revenue. COVID-19 demonstrates the need for a strong and sustainable health care system in Missouri. Hospitals and health care providers have been hard-hit as services were cancelled and sheltering in place orders led to sharp utilization and revenue declines. Granted, there are government funded programs to help hospitals, Scotland County’s included, compensate for some of the lost revenue and utilization by patients and payroll shortfalls. However, like a transfusion to a chronically anemic patient, these temporary lifelines are not the answer to rural hospital chronic underfunding.
Opponents of expansion are expected to make the cost to state government the centerpiece of their campaign against the initiative. While a common argument by opponents, this has not been the case in states that have adopted expansion. Research from Health Management Associates reviewed three states similar to Missouri, and found that expansion had a positive effect on state’s financials when the states used expansion to adjust exiting state-funded enrollees.
Medicaid expansion would provide a long-term solution to coverage for the working poor. These individuals are less likely to be offered health benefits with their job or have access to a consistent venue for primary care. Medicaid coverage would offer stability and increased access.
Missouri hospitals provide approximately $1.5 billion in uncompensated care annually. Caring for all Missourians, without regard to their ability to pay, is a fundamental part of hospitals’ community-supporting mission. The general payer mix for Scotland County Hospital & Clinics is 70 percent government insurance (Medicare/Medicaid), 15 percent self-pay, and 15 percent commercial insurance. Of the 15 percent self-pay, the hospital collects about 12 percent of those bills, which is about $1.5M (or about 3.7 percent of annual revenues) of uncompensated care by Scotland County Hospital, continually threatening sustainability of our “services close to home” mission.
Reduced uncompensated care spending will allow hospitals to address other health-related challenges in the community, such as behavioral health and upstream social determinant of health. These are health promoting factors in our neighbors’ living and working conditions – transportation, housing, healthy nutrition, access, and legal, for example. With expanded Medicaid coverage for low-income working Missourians, hospitals and health care providers will have additional capacity to focus on staying healthy, rather than treating an advanced or acute health problem.
Ten rural hospitals in Missouri have closed since 2014, and approximately half of Missouri’s rural hospital operate with a chronically negative margin. Scotland County Hospital is one of the hospitals operating with negative margins. Six rural Missouri counties lack a primary care physician, and 71 counties lack obstetrics coverage. Rural Missourians travel farther to receive care. Hospital closures have added to the challenge.
As is the case with all states, the federal government would pay 90 percent of the ongoing cost of Medicaid expansion in Missouri. The state’s 10 percent share would be offset by the economic boost and stability in the healthcare sector. “Whether you live in a state that has expanded Medicaid or not, you’re paying for it through your taxes, you’re just not getting the benefits, if your state isn’t participating,” said Missouri Hospital Association (MHA) Vice President of Health Policy Sheldon Weisgrau. “Instead of bringing our tax dollars back home, currently we’re sending our money to California, New York, and other states that have already chosen to expand their Medicaid programs.”
The positive economic experience from the other expansion states, as well as the moral and ethical imperative to assure a medical safety net for our economically disadvantaged neighbors, together, make a strong case for Missourians to vote “Yes” on August 4 for Amendment 2.