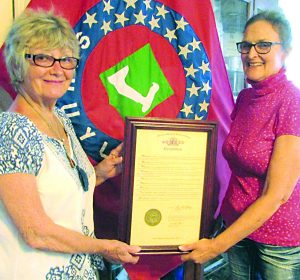 Govenor Parsons recently signed a House Resolution, which honors the 175th anniversarey of Schuyler County. The Resolution was presented on the house floor in May by Rep. Greg Sharpe, during the legislative session.
The Resolution, which Stephanie Campbell (far right), vice president of the historical society, initiated, is on display at the Historical Society Hall Museum.
President of the Schuyler County Historical Society Sandra Redding (far left) thought it was only fitting that the Schuyler County flag, designed by Frances Norman of Lancaster, be a part of the offical presentation.