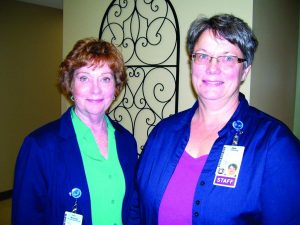 The Scotland County Hospital (SCH) Employee Committee in Memphis, Missouri, recognized employees for their years of service with the organization and awarded service pins this month during National Hospital Week.
There are several employees at SCH that have been loyal to the organization for multiple decades and received service pins this year. At the top of that list, working 40 years is Tammy Newland, who works in the Business Office.
Tammy Newland is a native of Downing, Missouri, and began her career with the hospital in 1980 in the Patient Accounts Department. She then moved into the position of Personnel Assistant and Payroll Clerk. In 1988, she assumed the position she currently holds as Accounting Supervisor. In this position, she oversees Accounts Payable, General Ledger entries, Pay Roll, and assists with Human Resources, as it relates to these areas. Tammy and her husband, Rodney, live in Downing, and they have two children, four grandchildren, and one great grandchild.
Next on the list of long service is Brenda Prather, an Administrative Assistant with 35 years of service.
Brenda Prather, a native of Scotland County, started her career with the organization in September of 1970. She left the organization for a few years to raise her children and returned in November of 1985. In the 90s she worked as an Administrative Assistant role with the CEO and Board of Directors, along with becoming the Lifeline Program Manager about that same time. She continues in those roles. Although Brenda joined the organization in 1970, her continuous length of service is calculated from 1985. Brenda and her husband, Stan, live on the family farm west of Memphis and have two children and two grandchildren.
The Employee Committee recognizes employees, annually, with service pins in five year increments. Other employees receiving pins this year include:
25 Year Pins
Barbie Courtright
Dena Schmitter
Jeanne Parrish
Angela Hawes
Jasetia Buckallew
20 Year Pins
Sheryl Templeton
Jenny Mallett
Carla Cook
Alison Closser
15 Year Pins
Paul Reynolds
Chrissie Burkhiser
Krissy Siegfried
10 Year Pins
Charlotte Stelter
Rhonda Miller
Kendi Bradley
Brandi Glass
Robin Seppelt
5 Year Pins
Dr. Shane Wilson
Sherrie Peterson
Samantha Murphy
Elizabeth Guffey
Will Brauns
Matt Wickert
Angie Johnston
Alison Woods
Amy Brown
Jessica Christen
Barbara Dunnett
Michael Buford
The Hospital is in its 50th year of providing healthcare services in the community and opened its doors on July 20, 1970. Officials from the Scotland County Care Center and the Scotland County Hospital & Clinics are making plans for their combined 50th anniversary celebrations on July 2, 2020, if COVID restrictions are lifted.
A 50th Anniversary commemorative cookbook is available for purchase at the Care Center and Hospital for $12 each or can be mailed for $16 each.