Every year Schuyler FFA comes together to recognize the kids’ hard work, accomplishments, and say a final goodbye to the seniors. This year the seniors in FFA were Gavin Veatch, Addison Spray, Wade Cooper, and Evan Lawrence. The Schuyler County FFA Alumni presented two $300 scholarships to Wade Cooper and Gavin Veatch. The Schuyler FFA also awarded one $300 scholarship to Addison Spray.

Students, who excel in their supervised agricultural experience programs, can be recognized through the proficiency award program. Members must fill out an application to receive this. It can be awarded at local, state, and national levels, but this was the local award.

Scholarship Pins were awarded to students, who have maintained an A- or above in their agriculture class.

This year Mariah Buckallew won the Star Greenhand Award, because she had proven her leadership skills, ability to excel with her agriculture programs, and being there, when the chapter needed her most.

Gavin Veatch won the Star Chapter Farmer award for showing that he has the most outstanding farmer program and FFA participation of the chapter.

We also congratulated our Livestock Judging team for making it to state and for placing 14th out of 24 teams. This team consisted of Gavin Veatch, McKinley Aeschliman, Ashlyn Laws, and Jacie Morris.

We also have Mariah Buckallew attending HYMAX this summer. This is a leadership camp that only accepted 75 first-year ag students in all of Missouri.

After we gave out awards, we installed our 2021-22 officers.

Our New Team Is:

Then these new officers proceeded to finish off our 2021 FFA Banquet meeting. 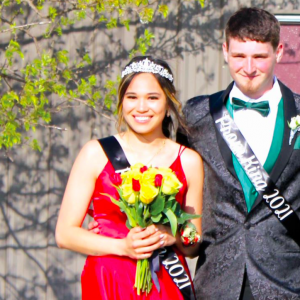