To honor our veterans, who made the greatest sacrifice for our freedoms, the Schuyler County Chapter of the Daughters of the American Revolution (DAR), chose Memorial Day, May 31, 2021, for the Pioneer Cemetery Dedication. Through long hours of research, Donna (Norman) Garvin identified many unmarked grave sites and many veterans, who were buried in the Pioneer Cemetery. More hours were spent by the DAR and members of the community cleaning up the cemetery and marking the graves of our veterans. DAR members opened the dedication with song, an invocation, history of the cemetery, reading of the soldiers names, a military salute, Boy Scout drum line, the benediction, and to close the service, Taps was played.

Raise your eyes and look for miles around and imagine these grounds, as the wilderness that it was. The pioneers buried here, cleared this land, planted crops, hunted, dug wells, shared with each other, and at the end of each day – they read the only book that they may have had – their Bible.

Some of the Pioneers Buried Here Are:

Gerrit Hooyer from Holland – Owned a Saddle and Harness Shop

Ester Hathaway French – One of the 1st School Teachers

George Grist – Was a Brick Mason

John H. Davis – Was a Surveyor

The memorial that we are dedicating today was placed at this site by the Schuyler County Daughters of the American Revolution. It is a bronze plaque embedded in a granite boulder, and today, it is surrounded by the first green grass of spring. The boulder was donated by Joann Webster.

The pioneers and soldiers buried here were not unlike this monument. They were strong, sturdy, unyielding, and resilient. Yet, like the first green grass of spring, they welcomed the beginning of a new life, in what would become known, as Schuyler County, Missouri.

The wives, daughters, children, disabled, and elderly did not experience the wounds and heart breaking challenges of the Civil War soldiers They experienced a different type of suffering.

The challenges of their day-to-day household chores and raising children were now complicated by providing food, water, hunting, caring for livestock, protecting their homes from thieves and wild animals, burying their dead, and delivering babies.

The Civil War divided friends, families, and even churches. It was a bloody and confusing war.

There have been thirty-four soldiers identified, who are buried in the “Old Pioneer Cemetery.” One is a soldier of the War of 1812.

Soldiers Laid to Rest at the Pioneer Cemetery 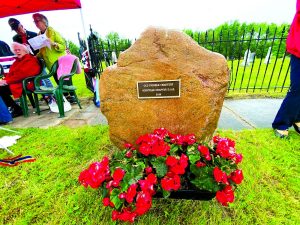