Louise Bushnell, 90, passed away Monday, May 24, 2021, at her home in rural Queen City, Missouri. She was born February 6, 1931, in Centerville, Iowa, the only surviving child of Clyde and Amy Weldon of Worthington, Missouri.

Louise lived all of her childhood in Worthington, Missouri, and attended the Worthington school. Louise and her parents were members of the Worthington Church of Christ and were known for their singing at church and school functions. It was in 1947 that she met and fell in love with Lloyd Bushnell Jr., and the two were married September 21st of that year. To this union three children were born, Sherry Louise, Roger Anthony, and David Lloyd.

Lloyd was employed at several farm jobs in Iowa, until the early 50s, when the young family moved back to Jimtown, Missouri, and eventually in 1958 purchased the family farm, where Lloyd was raised. It was there that Louise made a home for her young family, and a few short years later it would be grama’s house, where so many wonderful memories would be made for the grandchildren and great grandchildren. Her children were her life, and it was reflected in all the love and attention she shared with each and every one. She was always an active member of the local Jimtown and Worthington garden clubs and also volunteered at the Schuyler R-1 library.

She was preceded in death by her parents, Clyde and Amy Weldon; husband, Lloyd; grandson, Adam Bruner; and granddaughter, Stephanie Bushnell.

Visitation was in the afternoon on Thursday, May 27, 2021, with family receiving friends from 6 to 8 p.m. in the Dooley Funeral Home, Queen City, Missouri.

Funeral service were held at 1 p. m. on Friday, May 28, 2021, in the Dooley Funeral Home with Elder Delbert Russell, officiating. Burial was in the Queen City Cemetery.

Memorials are suggested to the Queen City Cemetery. 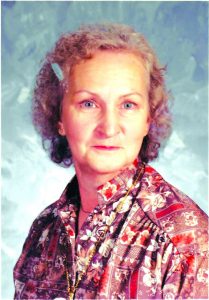