Gladly back to following the traditions of past Schuyler High School Promenades and Proms, the 2021 event was a big success for the students, their guests, families, and friends. The big evening, being one of the highlights of the “graduation season,” was held on Saturday, April 24. For the past few years, the Whippoorwill Acres Event Center has been the home of the high school prom, while the school has always been the location for the Promenade – either inside or outside, depending on the weather.

For prom royalty, the senior class elected Lexi Clifford, as their Queen, and Holden Huttenstine, as their King. Lexi is the daughter of the late Kylie Farrell and Holden is the son of Tony Huttenstine of Illinois.

Normally, the 2020 Queen and King return to participate in the event. However, Allie Scheib is currently serving overseas, so her sister, Makayla Scheib, stood in for her, as she and Cody Pinson crowned the royal couple. (Photos courtesy of Jessica Blackorby) 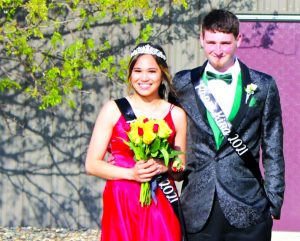