Marjorie A. (Rosenstangle) Morgan, 96, of Lancaster, Missouri, passed away on Saturday, April 10, 2021, at the Schuyler County Nursing Home in Queen City, Missouri. She was a resident of the nursing home for over ten years. She shared a mutual love with all the staff and fellow residents.

Marjorie was born May 27, 1924, in Macon, Missouri, to Gus Orville and Hallie May (Maple) Rosenstangle.

She was united in marriage to Harold Raymond Morgan on December 24, 1941, and to this union two sons, Ronald Lee and Tracy Ray were born. Raymond passed away on November 3, 2004.

Marjorie spent the majority of her adult life on a farm near Floris, Iowa. She was an exceptional homemaker and loved working with her flowers. Hummingbirds and butterflies would spend their summers, enjoying the fruits of her labor. She not only loved her hummingbirds, but she also loved her cardinals, both bird and St. Louis. Dust and dirt were not allowed to linger in her home. Her yard was just as immaculate. She loved God, her family, and friends. Her grandchildren and great grandchildren were especially important to her, and she spent many hours, entertaining and being entertained by them. She always had a smile to greet everyone and made everyone feel better after meeting her. Her life was spent helping others. She will be missed by all, who knew her.

Funeral services were held on Wednesday, April 14, 2021, at 2 p.m. at the Norman Funeral Home in Lancaster, Missouri, with Jon Mark Trammel of Glenwood, Missouri, officiating. Music was a special CD selections of “I Know A Man Who Can,” “Farther Along,” and “Go Rest High On That Mountain.” Pallbearers were Dillon Morgan, Easton White, Mayci White, Braxton Shaw, Bronson Shaw, and Braylon Shaw. Honorary pallbearers were Yancey Morgan, Jeff Redding, and Mike Redding. Visitation was held on Wednesday, April 14, 2021, between the hours of 1 and 2 p.m. 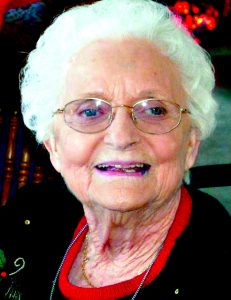