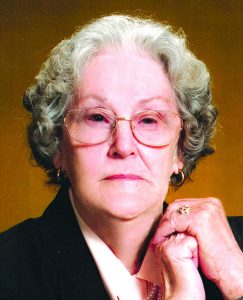 Annabelle (Engle) Alexander, 93, of Downing, Missouri, passed away on Thursday, February 4, 2021, at the Scotland County Care Center in Memphis, Missouri.

The youngest of six children, she was the daughter of Moses David and Anna Liza (Baker) Engle, she was born on June 18, 1927, in Kidder, Missouri, in Daviess County. On June 7, 1947, at the Methodist parsonage in Memphis, Missouri, she was united in marriage to Aubrey Duckworth Alexander and to this union six children were born, Judy Jeanne, James Arthur, Nancy Anne, Joyce Jane, Janette Susan, and Mary Elizabeth.

Ann was a member of the Fabius Baptist Church east of Lancaster, Missouri, and the Chit Chat Club in Downing, Missouri.

She was a lover of anything outdoors, flowers, birds, and raising a big garden every spring. She was also known for being the best cook in the neighborhood, and cooking for hay hands. Big dinners were not a problem for her! She also got to attend two concerts of Daniel O’Donnell, which was a huge highlight for her!

Funeral services were held on Monday, February 8, 2021, at 11 a.m. at the Norman Funeral Home in Lancaster, Missouri, with H. R. Rogers, Pastor of the United Methodist Church in Lancaster, Missouri, officiating. Music was special CD selections of “Blessed Assurance,” “Standing on the Promises,” and “In the Garden.” Honorary pallbearers were her grandsons, Robert Arnold, Samuel Alexander, James Kane, Jason Kane, Jeremy Kane, Joseph Graham, Andrew Graham, Bradley Tietsort, and Paul T. Woods. Visitation was held one hour before the services at the Norman Funeral Home in Lancaster, Missouri, between the hours of 10 and 11 a.m. Due to the virus, the family was not present at the visitation, but they were for the services. Memorials have been established for the Cone Cemetery, Red Cloud Indian School, or St. Jude’s. Burial was in the Cone Cemetery, north of Downing, Missouri. Online condolences may be expressed to the family, by logging on to normanfh.com. Arrangements are under the direction of the Norman Funeral Home of Lancaster, Missouri.