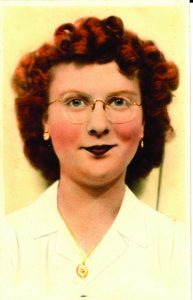 The only daughter of George William and Daisy Mae (Farris) Simmons, Juanita was born February 12, 1934, in Downing, Missouri. In her youth, Juanita was an active member of Schuyler County 4-H. She played clarinet in band and played on the ladies basketball team at Downing High School, graduating in 1951. She then earned a diploma from Dover Beauty College in Kirksville and held Missouri State Board certification in cosmetology, hair dressing, and manicuring from 1952-1997, practicing professionally and in her home.

On December 27,1952, she married Heinlen Dean Yearns, and the couple began farming in the Brushy Community east of Queen City, where they raised sheep, cattle, hogs, chickens, and grew corn, wheat, and garden vegetables. They had two daughters, Audrey Linn and Janet Sue.

During her childhood, Juanita attended Downing Baptist Church, where she made a profession of faith at Bible School the week of June 4, 1945, saying, “I will obey Jesus and follow Him.” She confirmed her faith in Christ through baptism on March 23, 1952, at the First Baptist Church of Kirksville. She and Dean spent over twenty years supporting a home missionary organization called American Sunday School Union. They attended the Schuyler County Church of Faith, until failing health.

Juanita is survived by her daughter Janet McClaskey and husband, Mike, of Castle Pines, Colorado; her grandson, Jack R. Yardley II, of Queen City; and her brother-in-law, Roy Wieneke, of Lathrop.

Juanita was preceded in death by her husband Heinlen Dean Yearns; her daughter, Audrey Linn Johnson; her parent; and her two older brothers, Warren and Robert Simmons.

Juanita will be honored in a private family graveside service at the Germania Cemetery with Pastor Sonny Smyser, officiating.

In lieu of flowers, please make donations to the Scotland County Care Center in Memphis, Missouri.