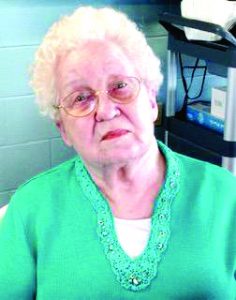 The daughter of Willard Joseph and Florence (Lucas) Johnson, she was born on March 9, 1933, in Glenwood, Missouri. She was a graduate of the Glenwood High School in Glenwood, Missouri. She was united in marriage to Roland Forsythe in 1952. On March 17, 1984 at the Lancaster Christian Church in Lancaster, Missouri, she was united in marriage to Earl Lloyd Dufur. Barbara was a bank teller, starting her first job at the Bank of Lancaster her senior year in high school. She also worked over the years at Midtown National Bank in Norfolk, Virginia, Chillicothe State Bank in Chillicothe, Missouri, Centerville National Bank in Centerville, Iowa, Schuyler County State Bank in Lancaster, Missouri, and the Bank Midwest in Queen City, Missouri.

Barbara is preceded in death by her parents.

Barbara enjoyed painting, artwork, going to the races to watch her grandson, and going to tractor shows and pulls with her husband, Lloyd.