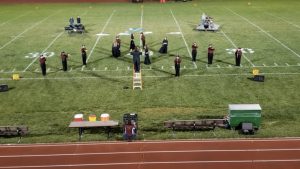 The Rams Band under the leadership of Les Aeschliman, and the Rams Color Guard directed by Jeanne Steen, entered the Scotland County Virtual Marching Band Competition. During the football game on October 2, 2020, a recording of their performance, “Appalachian Spring” by Aaron Copland, was made.

The recordings of each school were judged virtually in the categories of Field Show, Parade, Indoor Color Guard, and Indoor Drumline.

The awards were announced on October 7, 2020. The Color Guard won the “Outstanding Color Guard Award” for Class 2A. The Band placed third in the Class 2A Field Show out of five schools competing. Schuyler was one of four high schools selected to be highlighted, during the Awards Show.

To view the awards show, you can visit the YouTube video at https://www.youtube.com/watch?v=aH5j3m4a8Ro&feature=youtu.be&t=1190

The 29th Annual Parade of Champions marching band and field show competition sponsored by the Clark County R-1 Fine Arts Boosters, was held Saturday, October 10, 2020, in Kahoka, Missouri. There were twelve schools in the parade competition, and nine in the field show.

The Schuyler County Times and its readers send out a big, “Congrats to all!”