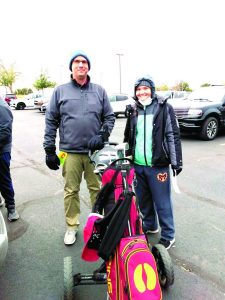 Haylee Burns, representing Schuyler R-1, posted a first day 122, putting her in 66th place. The course was very challenging with temperatures, ranging from 40-50 degrees both days. Day two Haylee put together one of her best rounds this season, she posted 112 for a two day 234 total. Haylee finished 61st overall.

This capped off a great season for her. She earned all-conference and all-district honors in addition to making her first trip to the state golf tournament.

On October 12, 2020, the Class 1, District 4 Golf Tournament was held at Mozingo Lake Golf Course in Maryville, where Haylee Burns, playing with the Lady Rams, carded a season best 111 – including a back 9 of 51. Her playing skills had her tied for 12th place, and since she finished within the top 18, Haylee qualified for the class 1 girls golf state championship held in Smithville.

The Rams traveled to Heritage Hills in Moberly for the Lewis & Clark conference tournament on September 29. Salisbury was the winning team with a 436, and Ashley Clark of Harrisburg was the individual conference champion with a 94.

Haylee Burns placed 7th overall with a score of 116. Haylee earned all-conference, placing in the top 10.