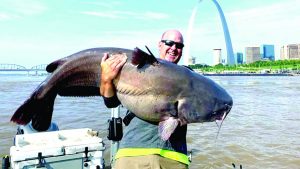 Wade Kaminski didn’t just land any catfish – he reeled in a 112-pound, approximately 5-foot-long monster Blue Catfish on the Mississippi River on July 3, 2020. “I initially thought I got into a snag,” Kaminski said. “I told my friend, who was with me, ‘I’m either snagged or I’ve got a monster.’”

Anglers spend countless hours sitting on river, lake, and pond banks fishing for catfish, one of the most popular game fish in Missouri. Some go after the channel catfish, while others go after the larger blue and flathead catfish. A lot of it depends on where you are and what type of bait you are using.

The channel catfish is widely distributed and is found in most rivers, streams, and lakes and ponds. The channel catfish eats a variety of plant and animal material. They are often considered opportunists and will consume virtually any food item that comes along.

The blue catfish, which is most often confused with larger channel catfish, occurs in swift channels and pools of the Missouri and Mississippi Rivers and their tributaries. The blue catfish mainly eats invertebrates and other fish.

The flathead catfish occurs in most of the larger streams, rivers and lakes of Missouri. The flathead is also very abundant in the Missouri and Mississippi Rivers and feeds primarily on live fish and crayfish. Many anglers enjoy the challenge of trying to land one of these large cats by pole and line methods. Others prefer using bank lines, limb lines, trotlines, and jug lines.

There are a few things to keep in mind when using any of these methods. Not more than 3 unlabeled poles and not more than 33 hooks in the aggregate, for any or all methods, may be used by any person at one time.

Regs for Various Methods of Fishing

Hooks attached to throwlines or trotlines shall be staged not less than two feet apart. All lines must be labeled with the full name and address or conservation number of the person, using the equipment. If not properly labeled, they are subject to being seized by an agent.

Setting lines is a very effective way to catch catfish, but before doing so know the regulations. Most Department managed lakes do not allow set lines.

Missouri May Finally Have a Prescription Monitoring Program