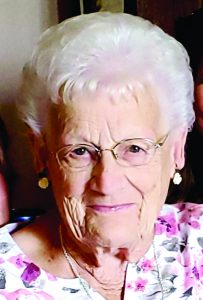 Sara Graves was born September 6, 1931, the fourth, and only red head, of the six daughters to Ivalee (Lucas) and Gerald Graves. The sisters remained good and loving friends all of their lives. Sara passed away on Sunday, October 18, 2020, at the Schuyler County Nursing Home in Queen City, Missouri.

Sara preferred working outside with her father to being indoors and was something of a tom boy.

She met our father, when they were in the high school play. Her cousin Ben Graves likes to take credit for introducing them and if that is true then my brother and I are very grateful to him.

She graduated from Lancaster High School and shortly after that was prescribed bedrest to treat tuberculosis. She was not allowed out of bed for a year and her father said she never complained and if you knew her that is believable.

Mom and Dad were married December 3, 1950. Dad was soon in the Marines, and Mom went with him to Kansas City and Florida.

After the Marines, they settled on the farm. Their first baby, Carl Aeschliman was stillborn at nine months in 1955. Fourteen months later their oldest and favorite daughter, Julie, was born. Less than a year later their son Alan was born, stealing her thunder.

We lost Mom’s younger sisters, Martha Tallman and Naomi Darnielle along with her husband Sheril Darnille, when they were young, and our grandmother Ivalee died, during those sad years.

Mom gave a home to Sherlyn and Anthony Darnielle. Sherlyn’s sons, Mike and Ben, are her red headed grandsons.

Mom was never bitter about her losses. She projected optimism, good spirits, and love to us. She once told me that she had spent enough time in bed, she wanted to be up and about every day.

Mom had several office jobs, was a teacher’s aid, a bank teller, and in business with Dad at Aeschliman’s Antics for twenty years, as well as in partnership with him on the farm for a lifetime.

She made many friends at their store and in the Tarkio Missouri Bank. Carolyn McEnaney in particular became a lifelong friend.

Mom encouraged us all, never fought with her friends and family, and made the world’s best potato salad, slaw, and deviled eggs.

She was firm in her convictions, but not confrontational and loved a good laugh.

Her husband was her first and most important love along with her children, family, and friends.

Sara and Woody attended Schuyler County ball games for decades and were the first “Super Fans” to be acknowledged by the Booster Club.