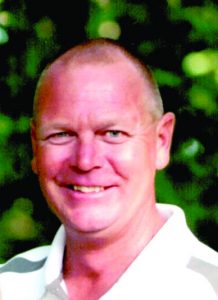 Sam Tarr, 52, of Greentop, Missouri, passed away Friday, September 4, 2020, at his home under the care of Hospice and family by his side.

He was preceded in death by his grandparents, Glen Sallade and Sam and Dorothy Tarr; his father-in-law and mother-in-law, Don and Darlene Hansen; and his brother-in-law, Mike VanHara.

Sam was a graduate from Schuyler County High School with the Class of 1986. After graduating, Sam worked for Wal-Mart. He then was employed seventeen years for Ortech, and for the past thirteen years worked for Ameren Missouri.

Sam enjoyed golfing, hunting golf balls, and loved going to the river bottom every night to check the crops.

Sam was a member of the Greentop City Council, longtime member of Lancaster Country Club, member of IBEW-Local 2, and of the Masonic Greentop Lodge #635.

In lieu of flowers, memorial donations in memory of Sam may be made to Schuyler County Cancer Relief Fund, Hospice of Northeast Missouri, or to the Lancaster Country Club (Golf Cart Path Fund), and may be left at or mailed to Travis-Noe Funeral Home, P.O. Box 306, Kirksville, Missouri, 63501.