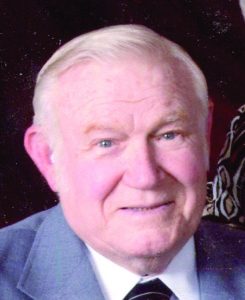 A graduate of the Downing High School in Downing, Missouri, Charles served with the U. S. Air Force from 1949 to 1957. He had been a resident of Hedrick, Iowa, since 1980.

Charles was a professional truck driver for 27 years, retiring from ConAgra in 1995.

He was a member of the Downing Christian Church in Downing, Missouri. Charles was a Past Commander, and a 24-year member of Arendt-Bowlin-Stubbs Post #83 American Legion.

He is survived by his brother, John Cook and wife, Maxine, of Memphis, Missouri.

Limited open visitation will be held between the hours of 11 a.m. to 4 p.m. on Friday, August 28, 2020, at the Reece Funeral Home in Ottumwa, Iowa. Funeral services will be held at 4 p.m. on Friday, August 28, 2020, with Doug McAntire, officiating with military services conducted by Arendt-Bowlin-Stubbs Post #83 American Legion. For those wishing to view the service live, you may do so on the Reece Funeral Home Facebook page.

Graveside services and burial were conducted on Saturday, August 29, 2020, at the Downing Cemetery in Downing, Missouri, at 10:30 a.m. with Larry Smith, Pastor of the Downing Christian Church in Downing, Missouri, officiating. Pallbearers were John Scurlock, Jerry Scurlock, Gary Ahrens, Henry Blessing, Vaughn Ruth, and Doug Norman. In lieu of flowers, memorials may be made to Arendt-Bowlin-Stubbs Post #83 American Legion or to the Downing Christian Church. Online condolences may be expressed to the family, by logging on to normanfh.com.

Arrangements are under the direction of the Norman Funeral Home of Lancaster, Missouri.