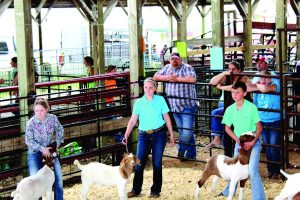 Brenna Whitlow, Schuyler FFA member, shows her goat, during the Jackpot Lamb and Goat Show on Saturday, May 30, 2020.

By Corey Hanes, FFA Advisor
Saturday, May 30, 2020, marked a first for many, during the pandemic, which has seen people across our country staying home and not being able to get out and go. I believe we as a society are built to be on the move, and we as Americans are bred to get out and explore, to see new places, compete with one another, to meet new people, and forge new friendships.
All of which came to a screeching halt in mid-March, and until recently we have been at home, save the occasional trip to get supplies or to an appointment. Saturday that all began to change in Schuyler County, with the FFA Jackpot Lamb and Goat Show.
For several weeks, the Jr. Livestock Committee members, FFA officers and members, and I had been working toward hosting this show. I contacted the Health Department to discuss our plans and to ask about any restrictions. Next, members of the Pioneers, Jr. Livestock Committee, and I attended a Queen City council meeting to discuss this show, as well as Pioneer days and the Schuyler County Jr. Livestock show in July.
After some discussion, everyone was on board with the plan, and the FFA officer team and I began working closely with Shaelyn Scoon, honorary peer advisor, and Michelle Whitlock, who has helped organize the show for many years. We decided to have people social distance as much as possible, to limit the number of participants in each class, and not serve concessions on the grounds.
Saturday finally arrived, and we knew very early that it was going to be a busy, but special day. For the last several years, our show has been a part of the Missouri Club Lamb Breeders (MCLB) Series schedule, but because of the pandemic, instead of being somewhere in the middle of the schedule, we were the first point show for the MCLB.
As trucks and trailers quickly filled the Queen City square and the side streets, it was apparent many people were ready to get out and show their livestock. We began weighing lambs and goats at 7:30 a.m. and for over two hours there was a steady line out the north end of the barns, waiting to weigh animals. Once registration was completed, we registered 218 head of lambs and goats, with competitors representing at least four different states, which both are records for our show. We had 77 head of goats and 141 head of lambs competing in 6 divisions, 3 for each species.
We paid set cash prizes for Champion and Market Goats and Lambs and 40 percent of entry fees in the other four divisions. All in all the FFA paid out $1519 in prize money. Since we use this as a summer fundraiser, we were very appreciative of our sponsors, who stepped in to donate money and supplies for the show.
We would like to thank Morton Pro-Finish for sponsoring the Champion Market Lamb; McVay Lawn Care for sponsoring the Reserve Champion Market Lamb; Kirksville Farm and Home and Lancaster MFA for donating pine shavings for the show ring; Back Roads Lawn Care and I’ll Tumbler For Ya for donating the prize buckets and the printing on the buckets; and Schuyler County Rotary and Schuyler County Jr. Livestock for continued support of our show and chapter. We also want to thank Queen City for allowing competitors to use the park and to have the restrooms open and ready, and I want to thank Michelle Whitlock, and all the great FFA members that worked to help make the show a success.