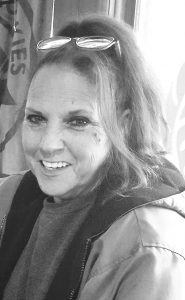 Sherry Lynn (Young) Bowling, 58, of rural Lancaster, Missouri, passed away at her home on Thursday, April 9, 2020.

The daughter of James Leon and Norma June (Pierson) Young, she was born on October 23, 1961, in Unionville, Missouri. She graduated with a two-year degree from Northeast Missouri State University in Kirksville, Missouri in 1982. She worked for Dr. Rex Lee for many years before traveling with her husband as a secretary for W & L Construction and more recently Eatherly Constructors in Garden City, Kansas.

She was united in marriage to Paul Douglas Bowling on October 21, 1983, in Lancaster, Missouri, by Judge Steve Willcox.

Sherry enjoyed going to NASCAR Races, spending time with her family, especially her grandchildren, and most of all, drinking wine with her sister-in-law, Phylis!

Funeral services will be held at a later date due to Coronavirus 19. The services will be held at the Schuyler County Church of Faith in Lancaster, Missouri, with Sonny Smyser, pastor of the church, officiating. Honorary pallbearers will be Mike Hurley, Glenn Roberts, A. C. Watts, Kevin Sayre, Carlon Sayre, Richard Hudson, Daryle Bennett, and Chris Dabney. Memorials have been established for the Schuyler County Cancer Relief Fund. Online condolences may be expressed to the family, by logging on to normanfh.com. Arrangements are under the direction of the Norman Funeral Home in Lancaster, Missouri.